We use cookies to make your experience better. To comply with the new e-Privacy directive, we need to ask for your consent to set the cookies. Learn more.

The nature of warfare has changed markedly in modern times. Myriad head, face, and neck injury statistics compiled this century bear this out, clarifying the intimate, devastating consequences of the proliferation of improvised explosive devices (IEDs) and urban combat. Compared to wars in the 20th century, head injuries are not just increasingly prevalent, they are also increasingly disproportionate. According to a 2008 study published in The Journal of Trauma, “Up to 30% of all casualties now present with facial and neck injuries, although the face, head and neck represent only 12% of total body area.” This data points to a modern reality that a large contingent of operators and battlefield commanders are well aware of and striving to address: the unprotected face of a soldier wearing body armor is not only exposed but specifically targeted by the enemy in an urban environment.”[i]

The repercussions of this targeting are cutting deeper with each passing year. Additionally, with new, improvised threats emerging with regularity, the types of combat head and face injuries experienced by troops on the ground has correspondingly expanded. The results of blunt force, blast, and ballistic impacts range from hard and soft tissue maxillofacial wounds to traumatic brain injury (TBI); the latter has been called “a signature injury of the wars in Iraq and Afghanistan”[ii] due to the fact that, according to the U.S. Department of Defense, there were over 343,000 soldiers diagnosed with TBI between 2000 and 2015[iii]—ranging in severity from concussions to penetrating wounds.

Beyond these distressing summaries, it is the human impact of these injuries that truly resonates: Many of the hundreds-of-thousands affected face months, sometimes years, of reconstructive surgery, rehabilitation, and reintegration work. For many, the impact that these injuries have on soldiers’ lives, and their families’ lives, is irreversible.  Additionally, with the brain and cognitive trauma associated with TBI, often some of the most devastating effects are the ones you can’t necessarily see. Researchers and organizations involved with veterans’ health affairs are just now starting to appreciate the long-term effects of TBI and similar diagnoses. For example, in July 2011, the Alzheimer's Association warned that “older veterans who experienced traumatic brain injury showed a more than two-fold increase in the risk of developing dementia.”[iv] With a growing body of studies in this vein producing similar results, and diagnosis still on the rise as military engagements spread to new regions and bring to bear new threats, it stands to reason that defense departments, the medical community, and industry will be investing heavily, likely hundreds-of-millions of dollars, to research, better understand, and prevent TBI.

A 2010 study conducted at MIT (in collaboration with the Defense and Veterans Brain Injury Center at Walter Reed Army Medical Center) and published in Proceedings of the National Academy of Sciences, provides evidence for a promising step forward for head injury prevention: According to study lead, MIT Associate Professor Paul Radovitzky, adding a face shield to current in-service helmets could mitigate hard and soft tissue maxillofacial wounds, and could “significantly reduce” the incidence of traumatic brain injury.[v] This conclusion was drawn from sophisticated finite element analysis (FEA) modeling that revealed that “the face is the main pathway through which blast waves are transmitted to the brain.”[vi] Therefore, this replicated research study provides evidence that face shields, such as visors and mandible guards (which impede “direct transmission of blast waves to the face,” as shown in an antecedent study conducted at the Walter Reed Army Institute of Research[vii]) could help reduce the incidence of TBI due to explosions because this physical barrier.

Revision has taken the lead in making the findings of this study reality for troops in the field, designing, developing, and manufacturing a variety of integrated head protection systems that address the demands of the modern battlefield and incorporate cutting-edge research on injury prevention. In particular, Revision’s Batlskin® technology, and various suites of integrated Batlskin components, bring advanced modular head protection to international and domestic forces in the continuing effort to enhance soldier and tactical survivability.

The Batlskin Modular Suspension & Retention System is designed to optimize stability and comfort, both essential for fast-moving operations. The system features an impact liner, made of low-profile, sweat-wicking material; an adjustable crown net that suspends the helmet shell on the wearer’s head, providing a free flow of air for extra cooling; and a dial-fit band with comfort pads, adding another layer of comfort and adjustability, allowing users to tighten or loosen the fit around the circumference of the head using a dial ratchet mechanism located at the back of the system. 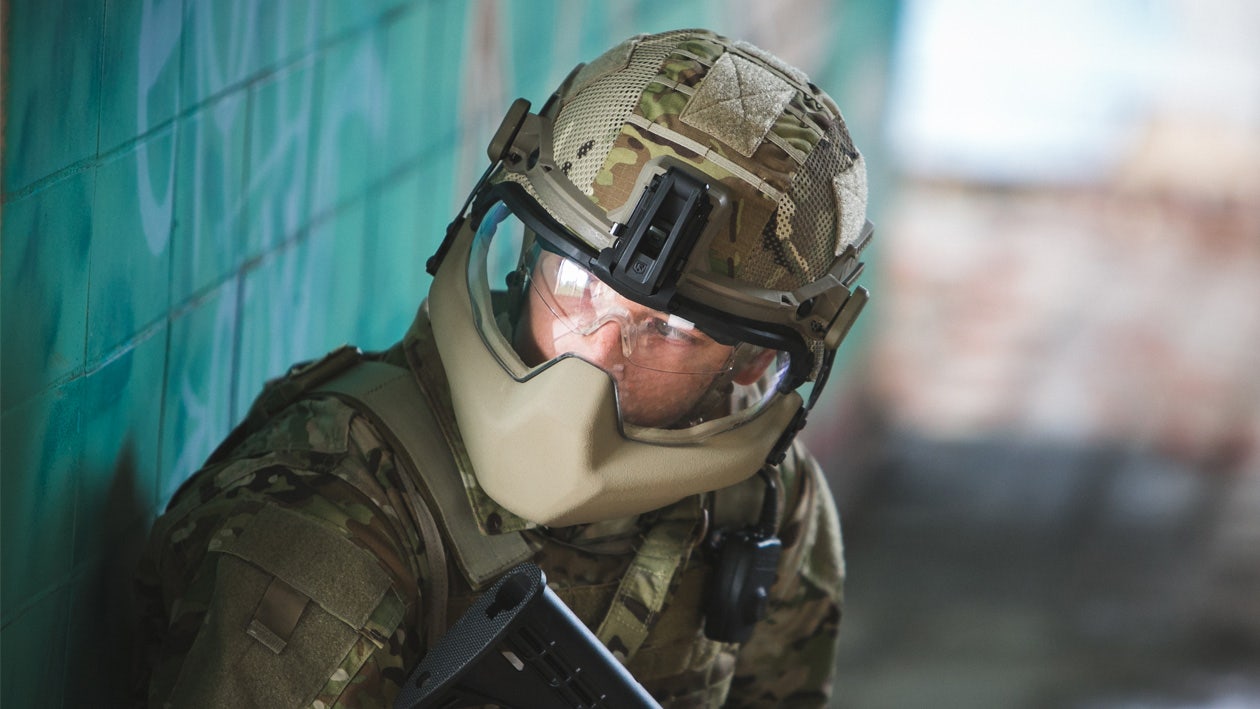 The Batlskin Front Mount is a lightweight and highly durable base that allows for rapid device or equipment attachment. In particular, the Batlskin Visor is attached using the Front Mount, allowing this protective shield to integrate seamlessly with the head system and seal against the mandible, as well as to pivot in multiple set positions. Ingeniously, the Front Mount also doubles as a stable and secure universal NVG mount, as well as a platform for other similar surveillance devices, to enhance operational efficiency. 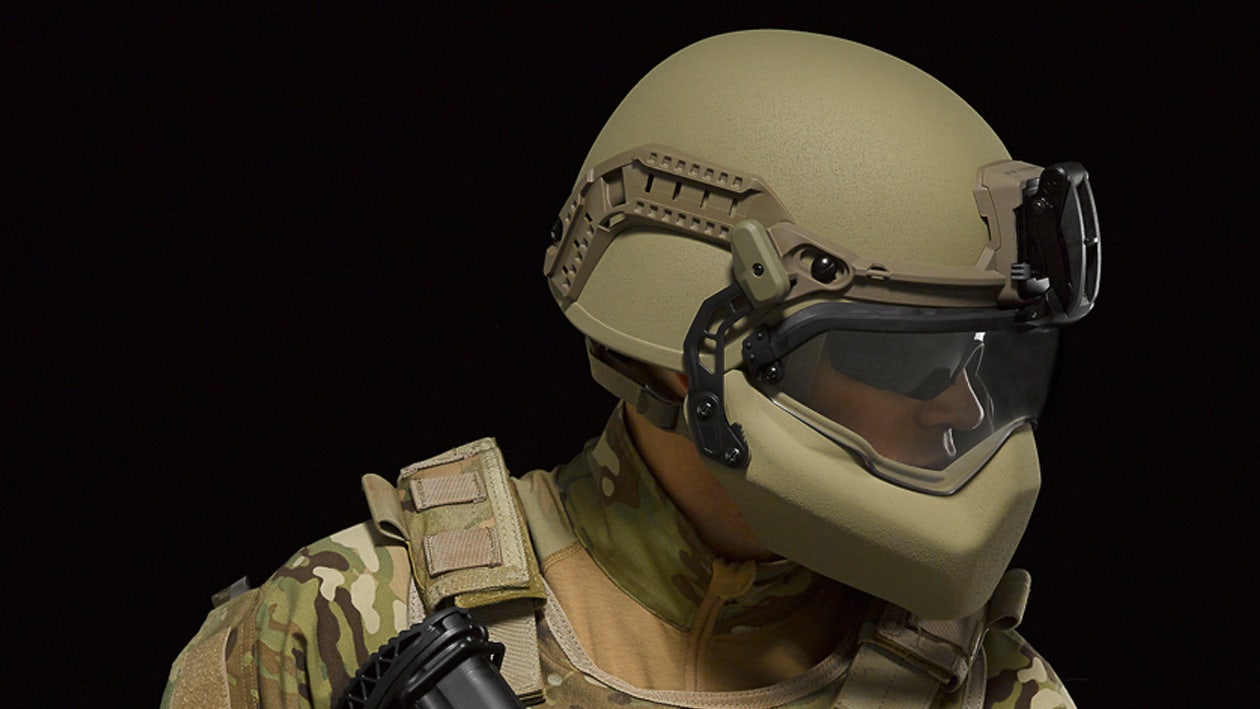 The Batlskin Visor provides blunt force, blast, and fragmentation protection for the eyes and face. Injection-molded, and featuring flawless optics in line with Revision’s innovative protective eyewear lines, Batlskin Visors maximize the field-of-view for superior situational awareness and can be adjusted to multiple positions—locked, vented, and up. Designed for quick, one-handed donning and doffing, The Visor frame, seal, and arm ensure secure attachment to the helmet during blast overpressure stresses. And, they are treated with Revision’s leading OcuMax® Plus coating, making them highly resistant to fogging, scratches, and chemicals.

Interlocking Rails fit flush to the curvature on either side of the helmet and connect to the Front Mount. The side rails act as a base for quick and easy attachment of devices such as cameras, lights, and other headborne accessories. Alternatively, Standalone Long Rails can be used with alternative NVG and stabilization.