Since July, reported incidents of laser attacks on law enforcement have skyrocketed around the nation leading to a variety of eye effects and injuries, including reports of partial blindness. While handheld lasers aren’t new, their widespread use with intent to harm is increasing, just as the demand for laser protective eyewear to prevent effects and injuries. The following article offers education about the laser threat and how to combat it. Revision has been at the forefront of laser and ballistic protective eyewear solutions for the past decade.

One of the latest tools of mayhem employed by street protestors is the handheld laser. Easily concealed, simple to use, and cheap to the point of disposability, they pose a serious threat to tactical law enforcement officers working a crowd control detail.

LASER SPECS
There are three important laser device specs to note when looking for laser eye protection. The power level of the device (measured in milliwatts), the color of the laser it emits (expressed as its wavelength in nanometers), and beam divergence (measured in minute of angle or milliradians.) We’ll cover power and color in more detail, but beam divergence is a complex sounding term that indicates how tightly focused the laser beam is. Wider beams are less of a threat.

MORE POWER
Handheld lasers used in street protests range from mostly harmless low-power keychain laser pointers to high intensity handheld lasers that rival the power of lasers used by the military to mark targets miles away.
How do you know the level of danger you’re facing when the crowd is shining lasers at you? Bottom line, you won’t. Like you, the protesters slinging light beams at you probably don’t even know how powerful their handheld lasers are.

Sure, the U.S. FDA regulates all laser products for safety. But, handheld lasers are considered a novelty, often sold on the gray market, imported by the shipload, and are among millions of products the government is supposed to inspect. It’s not surprising that laser safety regulation is a massive game of whack-a-mole that’s got regulators on their heels.

And because it costs more to make a less powerful laser that complies with safety standards than a more powerful one that doesn’t, it’s common to order a 3 mW laser from the internet and get one that puts out 10 or more times the stated output. So, it’s safe to assume every laser you see on the street is powerful enough to be dangerous, regardless of what the label says.

POTENTIAL INJURY
Laser danger comes in a few forms, the most feared is irreversible injury caused by a highly focused light burning the retina. The more common, but just as serious threat posed by lasers is the loss of situational awareness.

A laser in the eye has the same effect as any bright light source, it’ll first elicit a startle response causing you to blink. If you continue looking into the laser, you’ll be dealing with glare that obscures your vision and if you look into it long enough you’ll get temporary bright spots, called afterimages. While these effects aren’t as severe as permanent blindness, situational awareness is the last thing you want to lose when flying bricks and homemade pyrotechnics are in play. 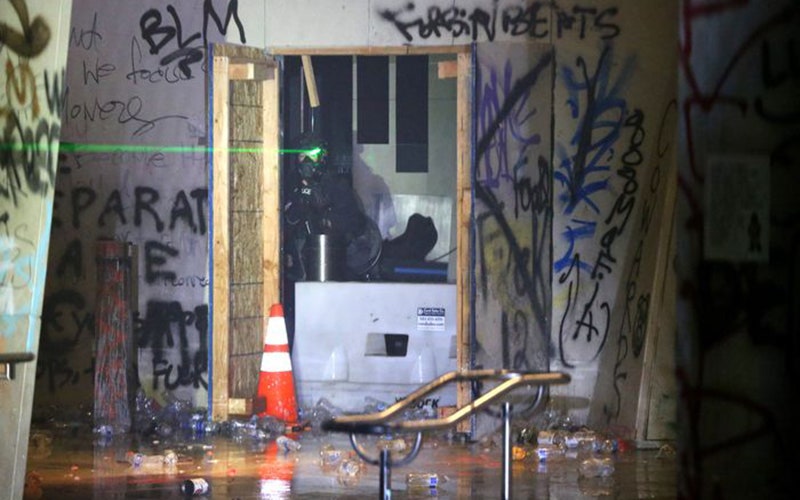 Above: A Green laser being aimed at Law Enforcement during Portland, Oregon protests.   Photo by Dave Killen, Oregonlive.com

Good news: you’ve got an involuntary blink response. Bad news: The blink response only occurs if the offending light is in the visible spectrum, and cheap lasers are often contaminated with invisible, IR and near-IR light.
This means a dim, 5mW visible laser could be pumping out hundreds of mW of light in the near-IR spectrum, and you won’t know it until you feel your eyes itching and burning for no apparent reason. By that point, that light is cooking your retina.

HOW DO YOU STOP A LASER
At the simplest level, a laser’s color is its Achilles heel. Want to stop a red laser? Put a red-absorbing filter in its path. Generally laser protective lenses will look the opposite of the color they absorb. Of course there’s more to blocking a laser than that, but a key consideration when looking for laser eye pro is knowing the color of the light you want to block. Eye pro manufacturers list this spec as a specific wavelength or a range of wavelengths in nanometers (nm).

LENS CONSTRUCTION MATTERS
To make a lens that stops a laser means choosing a dye that absorbs light at the same wavelength as the laser and incorporating it into the lens. This can be in the form of a coating applied after a glass or polymer lens is made, or by mixing the dye into the base material of a polymer lens before it’s molded into shape. The later method of construction results in a much more durable form of laser protection, since the dye is impregnated into the lens and can’t be scratched off.

Most laser protective lenses are made for use in a laboratory or on a manufacturing line where getting punched in the face or fragged by a BB-covered M-80 isn’t a concern. Keep that in mind when looking for laser eye pro that’ll be used on the street. There are only a few companies making laser eye pro that also provides mil-spec ballistic protection. 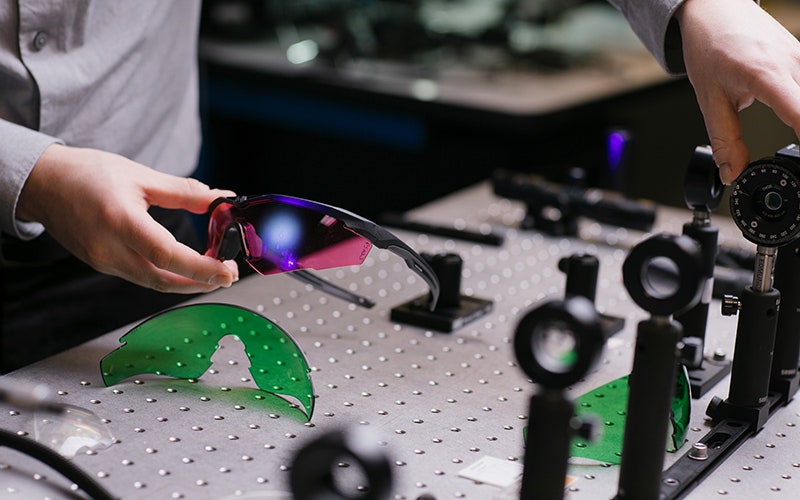 Above: Ballistic laser protective eyewear being tested against a laser hazard in the Revision Military Advanced Laser Research Lab.

CHOOSING THE RIGHT LENS
It’d be great if there was one lens that could block all laser wavelengths, but there isn’t. Knowing that blocking a laser is accomplished by filtering its particular wavelength of light, the practical cost of protection for a given color of laser is limiting the ability to see that color. So, a lens that would block all laser colors would need to filter out all colors of light, and that lens would essentially be impossible to see through.

Because each lens can only provide laser protection in a certain wavelength, or range of wavelengths, determining what color lasers you’re likely to face on the street is critical in choosing a protective lens.

LASER EYE PRO SPECS
Carefully consider the time of day you’ll use the laser eye pro. Nighttime is the right time for mayhem, so you’re going to want to get lenses that aren’t so dark that they can’t be used at night. The spec that tells you how much light a lens allows through is called its visible light transmission (VLT.) VLT tells you how much regular light a lens allows to pass though it as a percentage. Higher percentages allow more light to pass.

Another important spec you’ll see is a lens's optical density (OD). OD tells you how much of a laser’s light is blocked by the lens. It’s given as a number from 0 generally up to around 7, with higher numbers offering the most protection. Each additional OD absorbs ten times as much laser light, so a lens with OD 3 absorbs 10 times as much light as a lens with OD 2.

Practically speaking, the higher the OD, the more laser energy a lens can absorb. The higher the VLT, the more natural light is passing through the lens.

BEWARE OF IR ONLY LENSES
Before heading out to work a protest with the eye pro that came with your IR aiming lasers, confirm those lenses also provide protection in the visible light spectrum. IR rated lenses are generally only good for stopping lasers in the IR/Near-IR spectrum and won’t necessarily offer protection against visible lasers.

LOOKING FORWARD
The current limitations of protective laser lens technology means the need for situational awareness and broad spectrum protection are at odds with each other. Want to see everything? You have to give up protection. Want to be protected from the widest range of threats? You’re going to have to decide how much visual awareness to give up.
The threat of lasers to guys on the ground is still emerging, as is the response from companies making eye protection. Cutting edge research and development in tactical laser eye protection is focused on finding a no-compromise solution that provides full spectrum laser protection, uninhibited vision, and mil-spec ballistic protection using high tech solutions that can survive the rigors of the street and the battlefield.

ABOUT REVISION
Revision is relentlessly dedicated to protect vision by developing and delivering purpose-built eye protection for military and tactical use worldwide. The Company has invested in the development and delivery of advanced laser protective solutions over the past decade, and become experts in both ballistic laser protective solutions to protect military, law enforcement and first responders today, as well as the distinct ability to develop custom solutions based upon the unique threat and situation. Revision specializes in integration for the optimum and necessary balance of protection and performance. The Company is headquartered in Essex Junction, Vermont, USA. For more information, visit www.revisionmilitary.com, write sales@revisionmilitary.com, or call +1 802.879.7002.