The store will not work correctly in the case when cookies are disabled.
Menu
Account
Settings
Language
Change Language

Interested in Revision’s protective eyewear solutions or other capabilities?

Contact Our Team
The Pervasive Threat of Green Laser Illuminations and the Need for the Robust Military, Tactical and Aviation Eye Protection Found in Revision’s LazrBloc® GF-8 Lenses

THE DANGER OF INTENSIFYING LASER THREATS

In the midst of a riot control operation, eyes are wide and response triggers are necessarily hairpin-quick. When engaging in controlled aviation maneuvers, precision and focus are more than vital. When conducting a myriad of law enforcement tasks, speed and accuracy are paramount. Picture, at the apex of pressure and intensity in situations such as these, sustaining complete vision loss. This is the potential effect, intended or not, of laser strikes, and these are increasingly the scenarios where law enforcement agents, military police, and aviators find themselves under fire from laser threats. In an instant, laser illuminations can cause vision-disruption or even eye damage; and these dangers are amplified in circumstances where every second counts.

Laser (Light Amplification by Stimulated Emission of Radiation) technology has long been an interest for militaries around the world. However, in recent years, concern over the increased prevalence of readily-available laser technology, easily obtained through a variety of channels, including online retail markets, has been growing in the domestic sphere and the private sector. The general market laser industry has been booming in the last decade-plus with new, cheaper technology introduced across the board. This proliferation has led directly to new dangers that need to be counteracted. So far, the rise in incidents is not matched by an equal or sustained countervailing response against the threat. Occurrences of malicious laser use have cropped-up in greater numbers and now is the time to address and nullify the problem.

RISE IN INCIDENTS AND AWARENESS

Around the globe, the number of reports of lasers used against law enforcement officials, MPs, and pilots has spiked. Lasers have been used en masse against riot police in demonstrations in regions as diverse as Canada, the U.S., Ireland, Thailand, Greece, Egypt, and Italy, among others. While difficult to pin down to a single statistic, two trends are clear: these occurrences are on the rise and are more organized. Counter-optical lasers used in demonstrations have gained notoriety due to a number of high-profile incidents—Seattle, WA, for one, saw protesters at a WTO summit direct pointers in the field of vision of crowd-control police; and in Genoa, Italy, gatherers enacted an operation to utilize 1,000 mirrors to reflect laser light back at troops[i]. Another more recent example occurred in Cairo in 2013, where dozens of green lasers were seen striking Egyptian military helicopters circling over Tahrir Square, as well as directed against governmental buildings, police, and, at times, opposing protestors[ii]. Increasingly, for protestors and rioters, lasers offer superior standoff capabilities against police forces, resulting in officer vision disruption, distraction, disorientation, and even incapacitation. In January 2016, lasers were again in the headlines as another new iteration of this threat presented itself. Off Oahu, HI, a Coast Guard C-130 jet conducting a search-and-rescue operation for 12 missing Marines was forced to deviate course after a repeated, persistent directed laser strike on the aircraft’s cockpit[iii]. The following month, a Virgin Atlantic commercial flight with 252 passengers flying from London to New York was forced to turn around when the crew reported a “medical issue” with one of the pilots after a laser hit[iv].

Numerous worldwide aviation officials and organizations, as well as federal agencies, have expressed heightened awareness and urgency on this front[v]. For just 2015, according to the FAA (Federal Aviation Administration), laser strikes topped 6,624 reported incidents, up from 3,894 in 2014[vi]—which was up from just 46 reported incidents a decade prior[vii]. This represents a 144-fold increase from 2004 to 2015. And the threat is not confined to the US, with incidents reportedly on the rise in many countries throughout the world. BALPA (British Airline Pilots’ Association), for one, has found that half of all pilots experienced a laser attack in the past 12 months. This culminated in a British Airways co-pilot suffering burnt retinas after a laser was shined into the cockpit of his plane during landing—the most serious injury ever inflicted upon a pilot in the U.K. during a laser attack[viii].

With numbers of incidents rapidly increasing year after year, and with the threat metastasizing into the purview of peace-keeping agencies the world over, greater legislation and regulation seems inevitable. Within the commercial laser community, current regulations on laser technology are well-known for having longstanding and gaping loopholes that make it perfectly legal to obtain higher power, potentially dangerous lasers. This means that the flow of laser technology is not fully controlled but also that the power of lasers changing hands on the open market is relatively unconstrained; the safety parameters of devices may not be entirely clear to users or may be easily exploited for malicious purposes. At present, for a general public laser "pointer," the maximum power is set at 5 milliwatts (U.S.) or 1 milliwatt (U.K.)[ix]. But, much more powerful handheld lasers are available and are technically legal as long as they are not advertised for pointing or beam-display purposes. Plus, independent research has shown that many, if not the majority, of commercially available laser pointers are incorrectly classified, with power output exceeding designated compliance levels set by the Code of Federal Regulations[x]. On top of these deficiencies, it remains prohibitively difficult for law enforcement to track down illegally-marked or distributed lasers.

Correspondingly, laser threats are a particularly difficult danger to get a handle on because the threat is often hidden. As highly focused, single-beams of light, lasers have concentrated visible and invisible wavelengths, presenting a unique hazard to the human eye. These hazards range based on the strength of the beam and wavelength but extend from glare, flashblindness, and afterimage up to and including permanent blindness. Some of these pointers emit not only visible light (red, green or blue), but also emit additional invisible and dangerous (infrared) radiation at many times the stated visible light power. The latest reports indicate that illuminations by handheld lasers are primarily green in color (almost 95% of cases), as opposed to red[xi]. The wavelength of most green lasers (532 nm) is close to the eye’s peak sensitivity when they are dark-adapted. A green laser may appear as much as 35 times brighter than a red laser of equal power output[xii]. For any occupation where clear vision is vital, the danger of even temporary effects is intensified.

Eyes are much more vulnerable than skin; directed light energy can potentially cause permanent eye injury or loss. The threshold for incurring injury is lower and the duration to sustain this injury is shorter. Any eye exposure beyond set levels of Maximum Permissible Exposure (MPE) can cause ocular tissue damage. Even relatively cheap, easily obtainable lasers can have operating ranges up to a few kilometers at night, and often emit as much as 50 to 1,000 mW of power, a factor of 10 to 200 times higher than the MPE of a safe pointer[xiii]. This means that without proper protection, the eyes can incur serious damage and it will not be perceived until it is too late. A severe burn of the cornea may produce a loss of vision even after healing.

There are several ways to defend against such a direct threat: neutralize at the source or protect the area most sensitive. Given the widespread and hidden nature of laser strikes, at present, producing protective eyewear solutions is the easiest and most effective way to combat this increasingly untenable danger. Most commonly available green lasers emit light at a wavelength of 532 nm. Inexpensive and easy to obtain laser devices may not filter and/or align the optics, or can be maliciously altered, contaminating the green laser with a potentially harmful Near-Infrared (NIR) component at 808 nm. Revision Military, a world leader in protective eyewear solutions, has developed and patented a laser dye for a dual-band laser protective lens that blocks 99.8% of 532 nm green laser energy and 99% of the most powerful, damaging NIR component of commercial green lasers. Revision’s patented dye is used in the company’s new LazrBloc GF-8 Laser Protective Ballistic Lens.

Revision Military has long been at the forefront of ballistic laser protective eyewear. Seeing the increase in malicious use of green lasers to distract or blind law enforcement and military personnel, Revision’s team wanted to make sure that the company offered the most protective and functional eyewear available to those forces[xiv]. Revision’s LazrBloc GF-8 laser protective lens is a unique ballistic lens that blocks green laser light emissions and the high-risk NIR energy that exists outside the visible spectrum, undetectable to the naked eye. These lenses also allow exceptional color recognition and visible light transmission as compared to other dye-based lenses on the market, helping to maintain mission critical situational awareness. Beyond this even, unlike most laser lens products, which are only applicable to specific scenarios, Revision’s LazrBloc GF-8 lens formulation provides an interchangeable, situation-adaptable solution that can be manufactured for Revision’s StingerHawk® Spectacle System and Exoshield® Extreme Low-Profile Eyewear, as well as for Revision’s other Rx-compatible military spectacle and goggle lines. 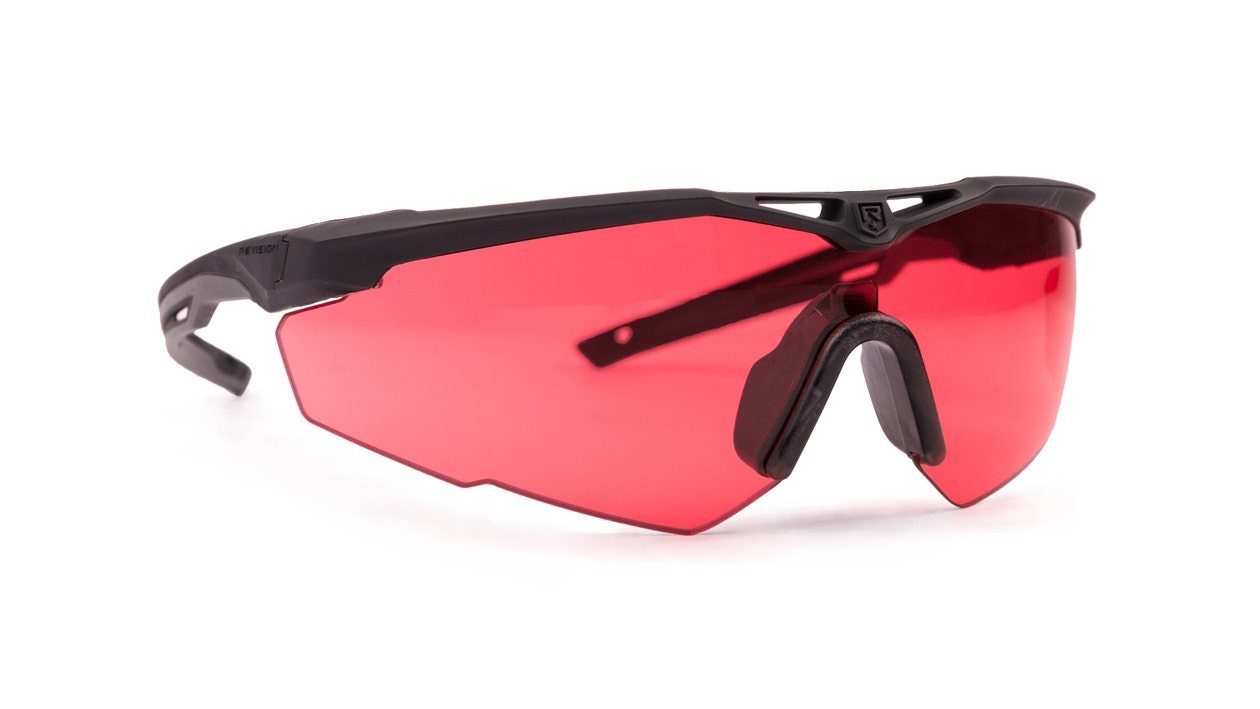 Revision has already demonstrated sustained commitment to laser protective solutions, and this addition represents an elevated level of innovation in this field. Revision has tested the LazrBloc GF-8 ballistic laser lens in the company’s Research & Development laboratory and has certified many of its laser protective lenses at 3rd party testing laboratories. Hundreds of thousands of Revision’s laser protective lenses have been sold all over the world over the last 10 years, including to the U.S. Army, U.K. MoD, Dutch DMO, Belgium MoD, the Canadian DND, Greek MoD, Swedish MoD, the German MoD, and the South African Air Force. Revision is committed to providing a full complement of high-impact, laser protective solutions for military, tactical, law enforcement, and aviation use in a wide variety of hostile conditions.